An Old Fashioned is a simple but classic cocktail, made by combining whisky or brand with sugar and bitters with water. 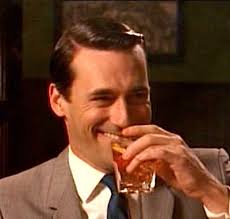 ‘Old Fashioned’ refers to the original, simple spirit-based drinks of the early 19th century USA, before the cocktail became a thing. It was a term used in the 1880s  to describe these simple proto-cocktails, as cocktails had become more akin to the complex combinations of many we know today.  In other words, the Old Fashioned is an enduring, absolute classic!

The drink became even more popular in the 2000s when it became the most seen cocktail in TV’s iconic Madmen series, and the signature drink of lead man and bad boy Advertising Guru, Don Draper.

Place sugar cube in an old fashioned glass and saturate with bitters, add a few dashes of plain water. Muddle until dissolved. Fill the glass with ice cubes and add whiskey. Garnish with orange slice or zest, and a cocktail cherry.